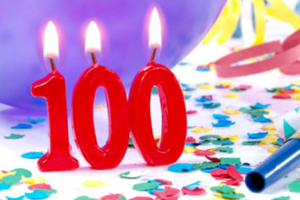 Wow, we almost can’t believe it – this year, Porter’s is celebrating our 100 year anniversary! A full century in business, and we couldn’t have done it without you, our fabulous and loyal customers. To celebrate, let’s take a quick look back at how it all started:

Porter’s Office Products was founded in 1915 by Arthur Porter. The business started as a variety store, which housed a printing business and local newspaper. We grew quickly and in the 1970’s, Arthur’s son, Warren recognized a growing demand for commercial office supplies. He began catering to this market and delivering supplies to businesses in the region.

In 1998, Warren’s grandson Mark joined the family business to run the commercial office supply division. In 2001, a new building was purchased to expand the operation, which gives us the Porter’s Office Products we know today. We are proud to say the business has remained in the family for its entire history.

Others Turning 100
We’re in good company! Here are a few others celebrating their 100th birthday this year: